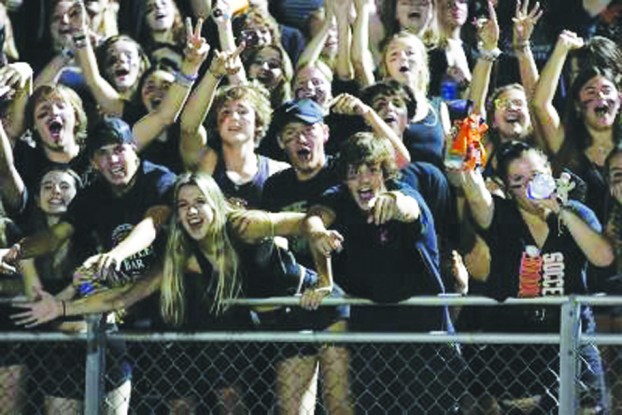 The Davie Crazies cheer on the War Eagles.

Lake Norman’s triple-option ground game owned the time of possession and limited the opportunities for the Davie football team’s offense. The Wildcats drained the clock on 14-, 18- and 16-play drives.

It didn’t matter. The Wildcats executed the keep-away game about as well as they could have – running 74 plays to Davie’s 44, picking up 27 first downs and gaining 379 yards on the ground – and still it lost in lopsided fashion, 42-28.

Davie was scheduled to play North Davidson, but North’s COVID-19 problems forced it to cancel. Davie coach Tim Devericks had to scramble to find a replacement, and Davie and Lake Norman hooked up the day before Friday’s game at War Eagle Stadium.

“I’ve never had my phone die on me, but Wednesday and Thursday it died on me (due to heavy use),” Devericks said. “At this time, it’s about finding our kids a game to play. I hate the jayvees weren’t able to find that opportunity, but at least we were able to get a home game tonight.”

You just can’t overstate how efficient and reliable A. Summers has been as a junior/senior. After throwing for 264 yards and three TDs in the opener, he went 16 of 24 for 268 yards against LN, making him 36 of 50 with no interceptions for the season. He’s made nine junior/senior starts and has tossed at least one TD in all nine. Remarkably, he’s thrown three TDs in five of the last six games.

While Za’Haree Maddox was the receiving star at West Rowan, it was Smith drawing the oohs and ahhs in Week 2. A junior who played backup running back in the spring and moved to receiver this season, Smith had 24- and 26-yard receptions on Davie’s first four plays from scrimmage. He was just getting warmed up.

“It’s a big change after being under Jack (Reynolds) and the backup for Tate Carney,” Smith said. “I knew I had some shoes to fill this year and I worked over the summer. I played (receiver) my freshman year on JV and now I’m back at H (receiver).”

Smith’s early catches led to a Carney touchdown and 7-0 lead. Landon King, a sophomore defensive back, recovered a fumble on Lake Norman’s second offensive snap. Davie cashed in the turnover, with Carney gaining 13 yards on a reception and Hudson catching a slant for a 12-yard TD. It was 14-0 less than six minutes in.

Then the Wildcats began executing their game plan and shortening the game. They moved 72 yards in 14 plays – all runs – to pull within 14-7. But their momentum was short-lived as Davie responded with their third TD in three possessions. Summers completions to Smith and M. Summers set the stage for a Carney TD in which he steamrolled through defenders on a 14-yard burst up the gut.

Later in the second quarter, Davie got first downs on receptions by Carney and Hudson. Then Summers connected with Smith down the right sideline. The result was a 42-yard score as Davie went 64 yards in 40 seconds to make it 28-7.

Smith gained his 152 receiving yards on six catches. He’s outperformed even the most optimistic expectations, putting up 12 catches for 219 yards in two games. After not catching a pass in the opener, sophomore M. Summers turned in three grabs for 47.

Smith: “(Maddox) had a big game last week, and I was under the radar a little bit. I knew they weren’t really preparing for me. We watched a little bit of film and we knew the seams were going to work.”

Devericks: “It’s what the defense is giving us. There are holes somewhere and we’ve just got to find the grass. Obviously they saw Za’Haree’s route-running and his explosive plays on film and said we’re not going to let that happen again.”

A. Summers: “They double- and triple-teamed (Maddox), so I found someone else and Brodie was the one. Brodie is an athlete. He can do whatever. Put him on the field and he’ll do it.”

In the second half, Carney scored on a bullish 24-yard scamper up the middle. He had 103 rushing/receiving yards and continued his torrid TD pace, this marking the 11th time he’s scored three-plus times in a game.

The Wildcats temporarily stemmed the onslaught by marching 80 and 92 yards to the end zone, the latter coming in the fourth quarter and paring Davie’s lead to 35-21 with 10 minutes left.

But Davie responded with the knockout blow. After Coy James recovered an onside kick, Smith made an incredible play on third-and-7. He was completely horizontal on a 21-yard catch. Three plays later, the cousins connected as A. Summers hit a wide-open M. Summers in the end zone for a 22-yard score.

“Markel replaced (an injured) Brodie at receiver,” Devericks said. “That’s how we practice. Markel and Brodie rotate and the other one goes in the backfield.”

Davie’s defense did not have an easy time dealing with the triple option, an offense it rarely sees. The Wildcats converted 8 of 12 third downs. They hurt themselves with three fumbles.

Shuler: “We didn’t have much time to prepare. It was tough. Coaches told us what to do, we followed directions and it worked out for us.”

Devericks: “We had about two hours before yesterday’s practice to try to get some kind of idea to prepare for it. Yesterday’s practice was longer than we’re used to and we walked through today, which is something we normally don’t do. I think the guys handled it the best they could.”

James, a freshman safety, led the way in tackles for the second week with 15. Linebackers Justin Hayes and Jadon Davis had 10 each. Safety Logan Yokley also had 10.

“Logan came down the alley,” Devericks said. “He doesn’t look like much (at 5-5, 150 pounds), but he brings a lot of fight. There is a lot of fight in that dog. I’m really pleased with how he ran the alley tonight.”

For the second week in a row, Shuler played with his hair on fire. All five of his tackles for solos and three were behind the line. More than once he had the ball carrier in a bear hug.

Devericks: “He’s been relentless with his effort.”

Shuler: “Coach (Perry) Long has gotten us right, and coach Devericks is pushing us harder every day.”

Brandon Wood had a sack that cost LN 8 yards. Mason Shermer blocked a 42-yard field goal try on the last play of the first half. Shuler demolished a fourth-and-2 option run in the third. Yokley spilled a ball carrier 6 yards back late in the third. Davis and Shuler recovered the other two fumbles, and King caused one of the fumbles.

Devericks said Silas Fuller, JT Bumgarner and the defensive line deserve credit. “For that kind of offense, all eight of those guys rotated and did a good job,” he said. “And they did a good job with the adjustments we made on the sideline.”

• The War Eagles, who averaged 7.6 yards per play, are on a run for the ages offensively. They’ve scored at least 35 points in eight of nine games, the exception a 31-14 loss to East Forsyth.

• Junior kicker/punter Palmer Williams has been impressive. Not only is he 14 for 14 on extra points across two games, he boomed 56- and 45-yard punts against LN. It was the longest punt since Peyton Hampton’s 57-yarder in 2018. “The (56-yarder) flipped the field for us,” Devericks said. “Most of the time in high school football, you’re backed up in that situation after a punt (from Davie’s 18).”

• Smith nearly had a 22-yard TD in the fourth. He had the ball for a second before enduring a crushing hit that jarred it loose. He was slow to get up. The injury to his left wrist could cost him a few games. “I ran a seam, caught it and didn’t expect the hit,” he said. “It’s thumping a little bit, but I think I’ll be alright.”

• Davie’s final nonconference opponent is Mooresville this Friday at home at 7:30 p.m. The teams were originally scheduled to meet in the Aug. 20 opener, but COVID concerns forced Mooresville to cancel. The Blue Devils are 1-1 after losing 48-9 to Hough and winning 21-13 over West Rowan, which lost 56-30 to Davie. “We’ve got to keep climbing and keep getting better each week and prepare ourselves for what the CPC has in store for us,” Devericks said.