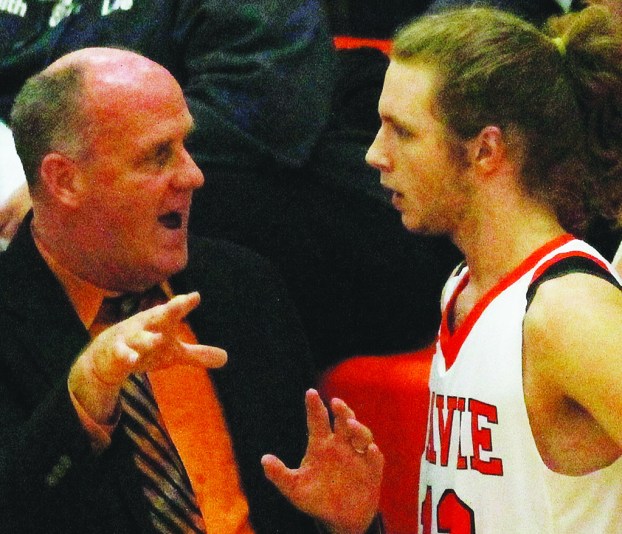 When Mike Absher announced on July 14 that he was leaving Davie High and moving to the coast, it brought an end to a long era and closed the book on the winningest coach in Davie boys basketball history.

Last summer Mike’s wife, Denise, took the principal’s job at Brunswick County Early College High School. Mike remained at Davie for the 2020-21 school year. Mike and Denise were 188 miles apart for a year. Mike recently took a job at Southeastern Christian Academy, a private school in Shallotte, about 13 miles from their new home at Sunset Beach. SCA is a K-12 school with 348 students, including 80 high school students.

“Our original plan was the spring of 2022,” said Mike, who also served as Davie’s athletic director for many years. His last day at Davie will be Aug. 1. “We wanted to go to Sunset Beach in 2022, but when she got the opportunity last year to go on down, we felt like that was a door that was opening and we probably should have faith and step through it. I committed to Davie County for at least one more year. We were able to hold firm to that. You know, timing is everything.”

The War Eagles, who have been a member of the North Carolina High School Athletic Association for 44 years, won three state playoff games before Absher; they won eight under Absher. He guided Davie to 10 winning seasons, and he led Davie to seven winning seasons in the rugged Central Piedmont Conference.

The War Eagles enjoyed four conference championships before Absher. They won three on Absher’s watch – the CPC Tournament in 2012, when Davie edged Mt. Tabor 69-65; the CPC Tournament in 2013, when Peyton Sell’s 3-pointer with four seconds remaining created 67-64 ecstacy; and the CPC regular season in 2019, when Davie went 10-0 in the league and celebrated the first regular-season crown since 1970.

But Absher made a lasting mark as much, if not more, for who he was than for what he accomplished. He brought an affectionate personality. He was always graceful in defeat and humble in victory. He had 15 assistant coaches at Davie, counting the freshman and JV teams. The list includes Mike Dinkins, Lance Everette, Larry Habegger, Tim Kenney, Johnny Miller, Terry Mitchell, Shane Nixon, Cameron Phillips, Shannon Pulliam, Kevin Revels, Bruce Wallace, Jeff Walton, Bill Walwik, Terrell Wilson and Ty Woodring.

“Absher has been a part of my life since I was in high school and has been a great influence on my life,” Wilson said. “I appreciate him for showing me how a man is supposed to be as a friend, husband and a coach.”

“Absolutely one of the best,” Woodring said. “I’m proud to have coached with him for the short time that I did. He taught me so much and was always interested in what goes on outside of basketball just as much as what goes on inside.”

“Coach Absher has poured his blood, sweat and tears into turning boys into successful young men,” Wallace said. “Since I have been his assistant, I have learned so much from him.”

Absher, 59, grew up in North Wilkesboro and attended Wilkes Central, graduating in 1980. He was an all-around athlete, playing quarterback in football, point guard in basketball and catcher in baseball.

“If I threw it seven or eight times a game, that was a lot,” he said of the his quarterbacking days, which came during the three-yards-and-a-cloud-of-dust era.

Probably no one would have guessed Absher played catcher.

“Baseball was a little bit boring to me. I wanted to be involved in every play. I couldn’t pitch, so I figured catching was the right place to be,” he said with a laugh.

Absher attended Greensboro College. He ran cross country as a junior and senior.

Absher’s coaching road is one heck of a journey.

Mike and Denise started dating during his junior year at Greensboro College, and he landed his first job at Tarboro Edgecombe Academy, a private school in Tarboro. For two years, he was the AD and the varsity head coach in soccer, basketball and baseball.

He left Tarboro and headed two hours down the road to Person County High in Roxboro. He spent one year there – assistant coach in football, freshman boys basketball coach and junior high baseball coach. Mike and Denise got engaged that year and they got married in the summer of 1987. Denise got a job in Florida, so off they went.

“I moved to Florida without a job,” he said. “Denise had a job and a place to live.”

Mike found a teaching/coaching job at Nease High, a 7-12 school in Ponte Vedra Beach. He was there for seven years. He coached basketball as an assistant and softball as the head man the entire time. He was head JV football coach for a while. He led his 1992 softball team to state runner-up.

“(In basketball) I worked under Bud Beech, who won over 600 games and won a state championship,” he said. “I was his assistant for three or four years.”

Mike and Denise grew tired of the extremely long drives to visit family, so they decided to leave Florida.

In 1992, the door opened at South Caldwell. He was South’s varsity boys basketball coach from 1992-93 through 2001-02. In the spring of 2002, Young stepped down as the Davie boys coach and Absher came knocking. He was hired by then-principal Linda Bost. All these years later, he authored seven of the program’s 15 15-win seasons.

The 2018-19 War Eagles achieved the most wins ever without a superstar. Owen McCormack (13.6 points per game), Michael Walton (13), Jacob Hendrix (12.5), Troy Griggs (10.5) and Brooks Johnson (8) worked together like spokes inside a wheel and won seemingly every close game.

They made an epic run in the playoffs, winning 88-77 over Smith, 91-67 over Northwest Guilford and 66-65 over Richmond County in front of a sold-out crowd in Davie’s gym. In the West Regional semifinals, Davie outlasted Page 72-67 to set up a meeting against Kennedy Meeks and West Charlotte. Davie’s run ended 73-59, one step from the state championship game.

Absher’s two sons made their marks on the program. Drew was a shooting star, ranking third all-time with 1,460 career points and draining the most career 3s (267 from 2005-09). The only two guys to outscore Drew during a career were Dwayne Grant and Duane Phillips.  Davis was the point guard on arguably the finest team ever in 2011-12, a team that boasted two current NBA players, the Martin twins.

Absher is going out with a bang. Davie has posted four straight winning seasons. It’s only the third time that has ever happened.

“One of the things I’m extremely proud of is we went 4-21 (in 2013-14) after everybody left. But to rebuild it back to where it is today is a highlight,” he said. “Our record the last four years is really good (65-26). I mean, since we’ve stepped foot in this building, it’s been amazing. Where we are right now makes me feel really good, building it and putting it back together.”

Absher’s 39th year as a teacher/coach will be at Southeastern Christian Academy. He will assist Tommy Johnson in basketball; he just happens to be from Wilkes County.

“I’m going back to the classroom and I’m going to be an assistant varsity basketball coach,” he said. “Those were my goals. I wanted to walk out of the AD world and teach again and stay involved in basketball because I still have a passion to coach.

“I’ve known Tommy for 30-plus years. He was the coach at Wilkes Central for 16 or 17 years and has over 500 career wins. He’s a friend of mine, but I did not know he was there until my interview. It’s a very small world.

“I don’t know that I’ll ever be a head coach again. I just want to be involved with basketball. I wanted Davie to be the last program that was something I built.”

Absher is walking away with lots of Davie boys basketball records, but he will be remembered as more than a coach.

“People call him ‘old school’ but he is anything but that,” Wallace said. “He has adapted and brought modern basketball to Davie. He has turned Davie County into one of the better programs in the area/state. His relationship with his players has been something special.

“He is more than just a basketball coach. He is a father figure, teacher and a mentor to many young men, including myself. He is a God-fearing man with a heart of gold. His relationship with his wife has taught me and so many others how to be a good partner. He has been a great father and that is evident with how his two sons turned out to be great men. He has taught so many people so many valuable life lessons.”