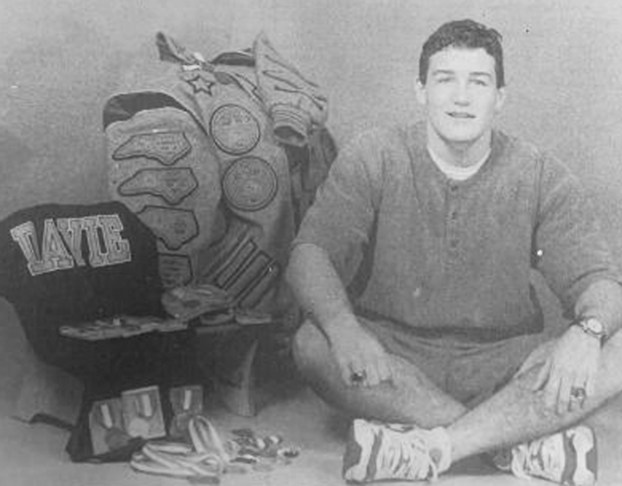 Fifth in a series on Davie’s all-time individual state champions.

If a Davie fantasy wrestling league was being held, the guy who lucked up and drew the first pick would smile broadly and take Scotty Spry. He would plug him in somewhere between 119 and 130 and would know with certainty that he’s ahead 6-0 before every match begins. Spry went 101-3 from 1992-95 and won three state championships in as many tries. That’s as good as it gets.

But you wouldn’t weep for the guy picking second. He would take Neil Cornatzer, insert him anywhere between 160-189 and tell his smack-talking buddy: “Now it’s 6-6, big boy.”

Cornatzer was another insane talent. His career record was 106-4 from 1993-96. In his three years at Davie, he went state runner-up, state champion, state champion. Yep, he was one step from matching Spry’s three-time feat. And he helped make Davie dreams come true in 1994 and 1995, when the War Eagles gave coach Buddy Lowery two of his three state championships.

During Cornatzer’s sophomore season in 1993-94, the War Eagles closed the regular season at 16-0 overall and 6-0 in the Central Piedmont Conference even though there was not a single senior on the roster.

The state dual team final was held at Davie, the gym packed to capacity. It was a big-time showdown between 19-0 Davie and 16-0 Riverside. Thanks to Cornatzer’s clinching victory at 171, Davie prevailed 31-28. The moment was beyond thrilling; it was Davie’s first NCHSAA championship in any sport.

After Cornatzer provided an insurmountable 31-16 lead, Lowery forfeited the last two weight classes and the overflow crowd rushed the floor.

“We know what it’s like to be on the other side,” Lowery said then. “We wanted to get on this side. It feels good.”

Cornatzer bumped up from 160 to 171 and pinned Elijah Pruitt in the second period. The victory was for history and for Larry and Cherie Cook, who were in the stands on that special night. Their son Jeremy was a team member who had been killed in a December car accident.

“I want to dedicate this to Jeremy,” Cornatzer said.

Riverside coach Jim Key said: “I know coach Lowery and the people here have looked for a state title for a long time. They earned it tonight. They did an outstanding job.”

In the state individual tournament at the Greensboro Coliseum, Spry picked up his second state title to complete a 35-0 season.

Cornatzer won his first three matches, including a pin in the semifinals. But in the finals, he met once-beaten Chris Jester of Independence. He fell behind 7-0 early and wound up losing 13-8. Jester finished 27-1 while Cornatzer closed at 25-4. It was – gulp – the final loss of Cornatzer’s career.

“Neil gave him seven quick points and (Jester) just rode it out,” Lowery said. “Neil was disappointed he didn’t wrestle up to his potential, but he had a good year.”

The 1994-95 War Eagles breezed through the regular season at 25-0 and claimed the CPC for the eighth time in 10 years.

Davie and Riverside met again in the state dual team final, this time in Durham. Davie was 29-0, the Pirates 17-0. Davie held a 31-24 lead with two matches to go, but the end saw a spectacular crash as Davie lost 33-31, its 49-match winning streak going down in flames.

“People saw a miracle in the Riverside gym tonight,” victorious coach Mike Merritt said. “I know that’s the closest thing to a miracle I’ve ever seen in high school sports.”

The War Eagles dusted themselves off and won the Midwest Regional for the third straight year, with 215 points to Anson County’s 146.5.

Two weeks after letting Riverside off the hook, the War Eagles redeemed themselves, winning the state individual tournament at Independence Arena in Charlotte. With Spry (130) winning his third state title and Cornatzer reigning supreme at 160, Davie outscored second-place Orange 121-87.5. They got help from Jenne (second at 125), Ferree (third at 103) and Carter (third at 171).

“We didn’t prove ourselves two weeks ago, but we showed people here who’s the best,” Cornatzer said.

In the semifinals, Cornatzer had a rematch with Riverside’s Brown, who led 2-1 in the late stages. The unflappable Cornatzer got a takedown with five seconds remaining to win 3-2.

Cornatzer had another rematch in the finals, taking on unbeaten Jester at 160. Their combined record was 70-1. This was a career-defining moment for Cornatzer, who pulled out a 7-5 decision in overtime to wrap up a 40-0 season.

Cornatzer said: “I didn’t come here for second place. I finished second last year and it has been in the back of my mind since.”

Lowery: “When he’s wrestling, you just sit back and think: ‘Dang, he’s good.’ He’s always thinking about what’s next. That’s why he wins. He’s one step ahead.”

Despite missing 10 starters from the previous year, the 1995-96 War Eagles won the CPC for the ninth time in 11 years thanks to a spirited 38-33 road triumph over undefeated Mt. Tabor.

After Jake Marion (171) pinned in the first period to give Davie a 29-27 lead, Cornatzer walked out to oppose Conon Goode, who had made it clear he wanted a piece of Davie’s shining star.

“He’s one of them that talks trash,” Lowery said. “It was put-up or shut-up time. That sucker’s crazy. You don’t make Cornatzer mad.”

After running the table in the CPC, Davie finished 27-2 as a dual team. In the Midwest Regional at Tabor, Cornatzer rolled to first at 189. (Bobby Brown was the only other War Eagle to qualify for the state.)

Cornatzer prepared for the big meets by practicing against Davie’s 215-pounder, Murphy.

“Murphy had Neil on his back, and he was so pumped to have Neil down,” assistant coach Jeff Barneycastle said. “Then Murphy started counting to five to get a three-point near-fall, but Neil didn’t realize what Murphy was doing. As soon as Neil realized what Murphy was doing, he picked Murphy up and threw him. He just bounced him off.”

In the state individual tournament, Cornatzer showed why he was untouchable as a junior/senior. He went pin, pin, pin, pin to win the title at 189 and complete a 39-0 season. His final victim was South Rowan’s Chris Kotish, who went 32-4 that season. All four losses came against – you guessed it – Cornatzer.

“Neil was relaxed going into the finals while the other wrestlers were over there puking,” Lowery said.

Cornatzer sailed off into the sunset with a 79-match winning streak, the greatest streak in program history.