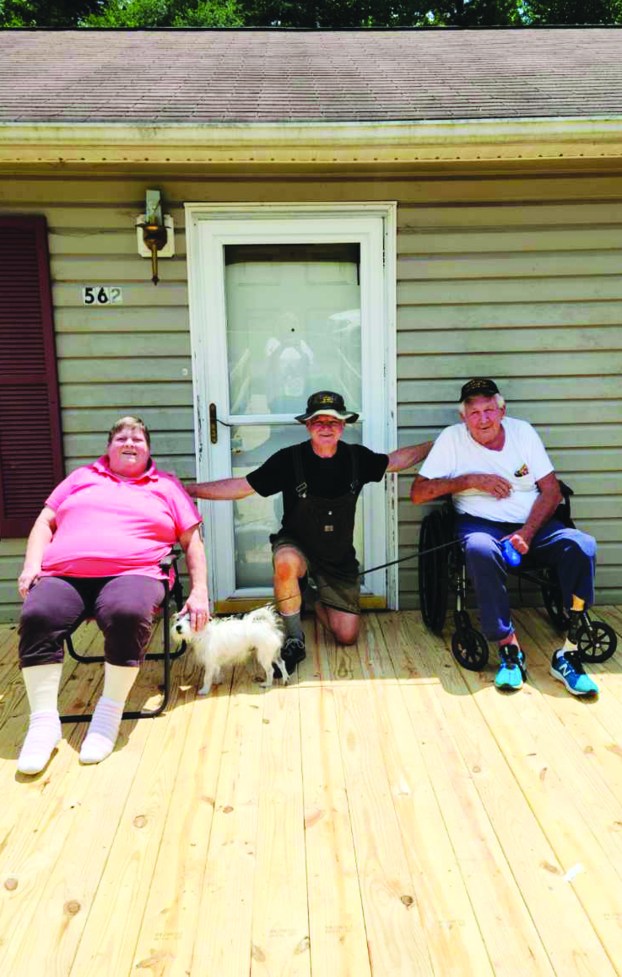 Habitat board volunteer Dennis Zembower with Donna and Roger Williams on their new deck.

Habitat for Humanity of Davie County has not been able to build a home over the last year because of the pandemic.

However, an outdoor deck replacement turned out to be a perfect way to serve the community.

Roger and Donna Williams of Mocksville have a long history in Davie County. Her father was in the Army Air Corps (now US Air Force) for more than 30 years and served in World War II. She was born in Texas, with her brother and sister being born in different states.

Roger Williams has a brother and sister still living in the area. The couple had two sons, one who works in Greensboro, and a younger son who died last spring.

Roger served in the Air Force for 20 years, living in North Carolina, South Dakota, Virginia and again in North Carolina. He flew missions as a strategic air command mechanic in Southeast Asia during the Vietnam War. Upon returning to civilian life, he worked for the N.C. Department of Transportation until his retirement.

Donna volunteers with A Storehouse for Jesus, providing clerical work in the dental and eye clinics. She makes appointments, interviews cliens, and makes sure that their fileds ar eup to date. She also is an active member of Holy Cross Lutheran Church in Mocksville.

The last several years have been hard on the Williams family.

Roger and Donna have health issues, with Roger becoming an amputee. Their youngest son died last spring. The deck on their home was more than 20 years old, and no longer capable of adequately handling an amputee.

The idea of replacing a deck for a disabled veteran was proposed to the Davie Habitat board. Roger and Donna agreed to become part of the Habitat family.

On Friday, June 25, a crew of about 25 folks removed the old deck and replaced it with an up-to-code and ADA compliant deck and ramp. Workers came from the Habitat board and the Wake Forest Baptist Davie Medical Center Management Team. Chris Johnson of CKJ Construction provided plans. The local DAV and veteran’s administration also provided workers.