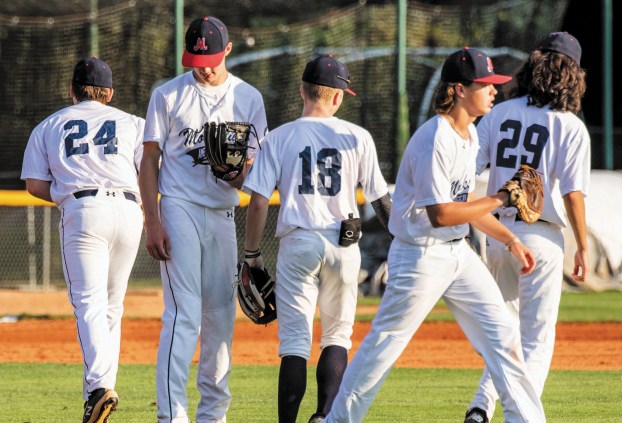 Conference on the mound. From left, Bentley Moody, Jackson Sink Carson Queen, Matthew Beshears and Caleb Stewart agree on how to pitch the next batter. — Photos by Regina Whitaker

Jackson Sink provided stellar pitching for five innings. Matthew Beshears rose to the moment in relief. And Caleb Stewart played a starring role by going 3 for 3 as the Mocksville Junior Legion Blue baseball team pulled out a joyful 2-1 home win over Concord in the Southern Division opener on June 15.

“It was a nailbiter,” coach Tim McKnight said after Mocksville improved to 2-0 overall. “We worked ourselves out of a couple of jams.”

Concord broke on top in the third by scoring an unearned run off Sink, who retired the first two batters before an error kept the inning alive. Two more errors followed.

The Mocksville fun began in the bottom of the fifth. With one out, Stewart singled over the second baseman. Jonathan Dzybon singled and Carson Queen was hit by a pitch to load the bases. Craig McBride’s single tied the game and Parker Simmons’ sac fly lifted Mocksville to a 2-1 lead.

The sixth and seventh innings were extremely eventful. Beshears took over in relief in the top of the sixth and promptly walked a batter. A bunt resulted in a hit as Concord had runners at second and third with no outs. Beshears came through with a strikeout before getting help from his defense. The next batter roped one to Dzybon in right field. He caught it, then fired a strike to catcher Dane Porter. The result: inning-ending double play to preserve the 2-1 lead.

Mocksville missed a chance to add insurance in its half of the sixth. Bentley Moody walked and advanced on Beshears’ sac bunt. With two outs, Stewart doubled to center, but the inning ended with Moody getting thrown out at home.

In the top of the seventh, Concord again put runners at second and third with nobody out. A walk and a double put Beshears and Mocksville under pressure with the 2-3-4 batters coming up.

Doggone if Mocksville didn’t get out of it. Stewart, the shortstop, fielded a grounded, looked back the runner at third and got the out at first. After three pitches were fouled off, Beshears got a swinging strikeout on the seventh pitch of the at-bat. Then he got a strikeout looking to end the game.

“They had their two mashers up and they chose not to bunt,” McKnight said. “We rolled the dice (by not loading the bases with an intentional walk) and it worked out.”

Loads of credit goes to Sink and Beshears, who combined on a three-hitter.

“They are definitely our one and two. There’s no doubt,” McKnight said. “Matthew threw for Elkin’s varsity as a sophomore. They’re a pretty good combination. We’ve actually got a good 1-2-3 punch. Cole Whitaker threw a lot for Davie’s JV. Then we’ve got Moody and (Hunter) Daywalt.”

Sink threw one-hit ball while tossing 47 of 69 pitches for strikes. He also got immediately ahead of 17 of 22 batters.

“Jackson has three pitches,” he said. “His best offspeed pitch is his changeup, and he’s got pretty good velocity. He can run it up there pretty good.”

Beshears left four runners stranded to earn the save.

“Matthew has a nasty curveball, and his changeup is not bad,” he said. “He’s more of a Spencer Nifong kind of guy. We threw more backwards with him. He made pitches when he had to.”

Stewart was responsible for half the Mocksville hits. McBride (1-3), Simmons (1-2, double) and Dzybon (1-1) had the other hits.