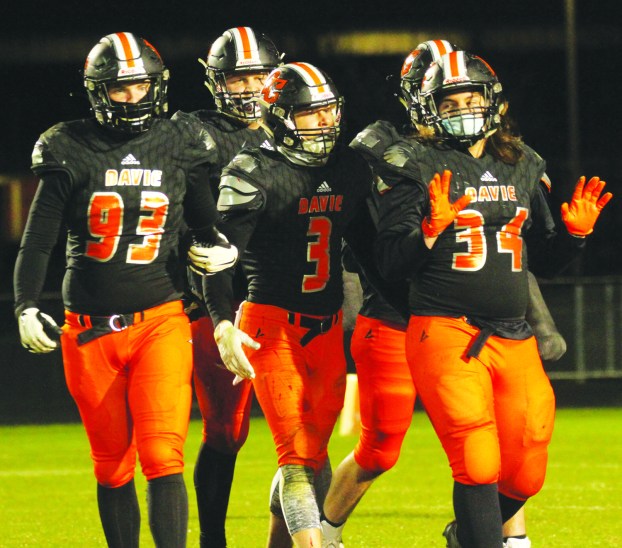 Friday’s homecoming game against East Forsyth will not be remembered as the greatest day in Davie football history.

Its offense against the first five opponents was spectacular, scoring at least 35 points in each game.

The offense against East was not. Davie committed four turnovers, did not score over the last 29:12 and lost 31-14 as East scored the final 24 points.

Davie, which came in controlling its own destiny in hopes of at least tying for first in the Central Piedmont Conference, fell to 4-2 overall and 2-2 in the league with a second straight loss. Meanwhile, it was a joyous moment for East, which started an ugly 0-2 (18-0 and 27-7 losses to Glenn and Grimsley, respectively) but has rallied with a three-game winning streak.

“We have a lot of young guys (on offense),” East coach Todd Willert said after his club improved to 3-2 overall and 2-0 in the CPC. “A lot of JV kids got pushed into varsity roles and they’re learning how to play. In our first two games, we were turning the ball over and our special teams were awful. Our defense has been strong all year. Who thought we’d be playing for a conference championship? I know no one did after Week 2.”

Davie quarterback Alex Summers was intercepted on the fourth snap of the game, but his defense came up big for him when East went for it on fourth-and-3 at the Davie 32. Running back Jemon Smith took a direct snap and met Caleb Bowling and Trevor Richardson, falling a yard short.

But Davie went three-and-out and East churned the ball on the ground on nine of the ensuing 11 plays. On third-and-5, Jaylen Raynor and receiver Da’Mon Stokes connected a 21-yard fade pass to the end zone as East went up 7-0.

Davie’s offense exploded =on its third series. Summers found Zymere Hudson for 22 yards. On the next play, Summers hit Jack Reynolds, who weaved 50 yards as Davie tied it at 7-7.

East’s kicker/punter, junior Andrew Conrad, boomed a 60-yard punt that pinned Davie at its own 5. No matter. Davie marched 95 yards in 10 plays. Summers bought time by rolling out of the pocket and Reynolds made a diving catch for 18 yards. Tate Carney reversed field and dashed 26 yards. Reynolds hauled in a 21-yard pass to set up an impressive 15-yard touchdown run by sophomore Brodie Smith. Davie had a 14-7 lead with 6:48 left in the first half.

East came right back. After pass interference was called on Davie on third-and-3, Raynor tucked the ball and scrambled 32 yards to convert third-and-9. Smith took the snap and ran 17 yards as East forced a 14-14 tie by driving 73 yards in seven plays.

Then Davie’s offense continued to roll. Reynolds, Carney and Za’Haree Maddox had receptions as Davie moved from its 20 to the East 43. Pass interference on East pushed Davie to the 28. Davie coach Tim Devericks made an easy call to go for it on fourth-and-1 at the 19, and Carney had the first down and more before fumbling at the end of the run. East took over at the 14 with 45 seconds left in the half.

Things went awry from there.

“Against a good team, you’ve got to take care of the ball and execute when you have opportunities,” Devericks said. “We had our opportunities and we just couldn’t take advantage of them.”

When Davie linebacker Gage Recktenwald pushed Raynor out of bounds early in the third, East had fourth-and-5 at its 36. Willert rolled the dice and ordered a fake punt. It turned out to be a game-changing moment as Smith swept around the end for 9 yards.

“We almost ran it in the first half and I said: ‘Let’s hold on to it,’” said Willert, who has piloted East to back-to-back 4A championships. “We got the iPads out and we schemed it. We made sure we had the blocking scheme right. We had it set up coming out of halftime. (Smith) is always on the punt team. We treat the punt team as an offense. Special teams are huge, man.”

Davie’s defense stiffened at the Davie 30 and forced Willert to summon Conrad for a 44-yard field goal. The kick was good to give East a 17-14 lead. But the way defenses had just melted all season when Davie’s offense took the field, there was no reason to panic with a three-point deficit (17-14) with nearly 19 minutes remaining.

“I thought our defense did a phenomenal job of getting us the ball and giving us opportunity after opportunity,” Devericks said. “They bowed their neck multiple times. We got a stop to force a field-goal attempt, and then it’s only a three-point game with a quarter and a half to play. We felt pretty good about our chances at that point.”

Carney gained 28 yards on three runs and a reception as Davie had first down at midfield. But the wheels started to fall off when RJ Brown intercepted a pass, ran through two guys and returned it 58 yards to give East a 24-14 lead.

“He’s going to be outstanding,” Willert said of the sophomore linebacker. “The kid is unbelievable. That was a huge play.”

There was concern with a 10-point deficit, but the War Eagles still had every reason to believe they could rally. After all, they erupted for three TDs in less than two minutes the previous game at Glenn. The season had been full of glorious offensive moments. At halftime, they had an incredible streak of scoring in 17 consecutive quarters.

But a comeback never came. Davie wilted, failing to score on its last six possessions.

Davie amassed 440 yards, but it kept tripping itself. The offensive output is quite incredible when you consider Davie only had the ball for 15 minutes, 30 seconds. East’s methodical offense kept the ball for 32:30, kept Davie’s invaluable stars off the field and averaged 5.6 yards on 58 rushing attempts.

“That was the game plan,” Willert said of East’s huge advantage in time of possession. “Our game plan was to grind it out, try to keep (Carney) off the field and not turn the ball over. They were bringing an extra guy in the box. If we can be in the game at halftime, I feel great that my assistant coaches can make adjustments. They didn’t score in the second half, so we made some great defensive adjustments, too.”

Things were going so well for East than even a fourth-and-31 punt from the East 31 turned out golden. Conrad killed the punt for 65 yards to the Davie 5. The visitors broke Davie’s back with an 11-play, 80-yard drive that closed the scoring with 6:36 remaining.

“That kid is unbelievable,” Willert said of Conrad. “We’ve had a lot of great punters and kickers, but I don’t know if I’ve had a guy who could do both like him.”

• Although Carney wasn’t perfect, he turned in yet another monster game by averaging 7.7 yards on 25 carries. He’s run for 194-plus yards in five of six games. He’s ninth on the single-season list with 1,322. He’s fourth in career rushing yards with 3,224.

“Boy, they’ve got a team,” Willert said. “That Carney kid is unbelievable.”

• Reynolds was at it again, using five catches to post his fourth straight 100-yard game. (The season record for 100-yard receiving games is six by Ben Ellis in 2014.) Reynolds ranks third with nine career 100-yard games.

“Everybody talks about Carney, but that wide receiver is really, really special, too,” Willert said. “Coach does a great job of moving him around. It’s hard as a defensive guy because he’ll be an outside receiver and then he’ll be an inside guy. And then he’ll be left or right. It’s hard to make a game plan to cover him. We wanted to keep our two best cover guys on him, but it’s hard because you’ve still got to tackle Tate. I’d love to have a player like Jack.”

• Davie has lost five straight to East. … This was Davie’s fewest points in 10 games, dating to a 21-16 loss to Glenn in 2019. … Smith was productive in his backup role at running back, putting up 64 yards on eight carries.

• Davie will close the regular season – and most likely its season, period – with a home game against arch-rival West Forsyth Friday at 7. While the shine has worn off the War Eagles, the Titans are swaggering at 4-0, 2-0. They’re coming off a double-overtime 28-25 win over Reagan.

While the War Eagles have little hope of making the playoffs, they can play spoiler with East and West tied for first. Sure, the War Eagles are an underdog. But with weapons like they have, you can never say they have zero chance. You remember the matchup in Clemmons in 2019. Reynolds put on a clinic with 15 catches for 180 yards, Carney rushed for 101 yards and Davie stunned a 7-0 West 37-34.

“Every week is an opportunity,” Devericks said. “We want to go 1-0 (this) week. And you just never know what’s going to happen (regarding COVID and the playoffs). You’ve just got to take advantage of the opportunity you’re given.”