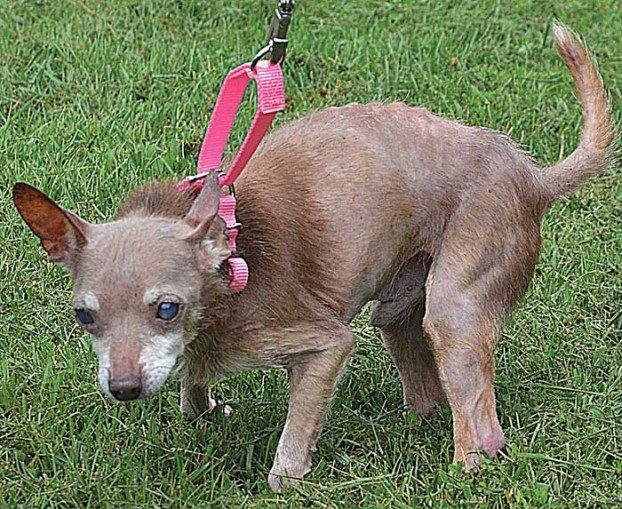 This little dog, blind, was found covered in fleas and tumors.

A Farmington woman is in the hospital on an involuntary mental commitment after officers raided her home last week and confiscated dozens of animals living in squalor.

The woman’s identity was not identified by the Davie County Sheriff’s Department.

Sheriff J.D. Hartman said that animal control had been working with the woman to improve conditions for the animals, but little or no progress had been made. She had been arrested in similar charges at a different location in the past.

Because the conditions were so bad, local fire departments and hazmat suits were used. The mud, urine and feces was knee deep in some places, said Lisa Nielsen, animal control director.

Most of the animals were in enclosures, with little room to move, she said, including the house, barns and sheds.

A total of 47 animals were confiscated: one donkey, six miniature horses, six chickens, two cats, five horses, four pigs, 15 dogs, a fox, an opossum, two lizards, three ducks, a non-native fox and a kinkajou, a mammal from South America that is illegal to import.

None of the animals were in good shape, Nielsen said. Wildlife resources officials said the opossum had to be put down, because it could not be released back into the wild. A veterinarian recommended euthansia for the donkey.

Most of the other animals are being cared for by volunteers at foster sites, she said, saying the horses suffered from serious hoof problems among other ailments.

None of the animals are adoptable until after the case is tried in court, Hartman said. Warrants (21 felonies and 8 misdemeanors) have been issued for the woman’s arrest, expected soon after she is released from the hospital. That means it is the sheriff’s responsibility to care for the animals in the meantime, including veterinary bills, food bills and housing bills. Donations are being accepted to help with those costs, he said. “We’re going to do everything we can to care for these animals.”

Officers and volunteers were on the scene for more than 13 hours. The sheriff’s department was assisted by EMS, the Farmington Fire Department, the fire marshal’s office and animal advocacy organizations.

“We would like to thank all agencies and the community for helping,” Hartman said.